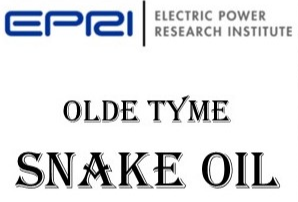 The Electric Power Research Institute (EPRI) tries to pass itself off as a legitimate research institution when, in fact, it is a thinly veiled electric industry lobbying group. Here is EPRI’s description from their website:

The Electric Power Research Institute (EPRI) conducts research, development, and demonstration projects for the benefit of the public in the United States and internationally. As an independent, nonprofit organization for public interest energy and environmental research, we focus on electricity generation, delivery, and use in collaboration with the electricity sector, its stakeholders and others to enhance the quality of life by making electric power safe, reliable, affordable, and environmentally responsible.

Hmmm. This sounds legit! That is, until you dig deeper. Who are the members of EPRI and is it really “independent”?

EPRI has collaborated with the electricity sector and its stakeholders since 1972 and our membership has grown to represent approximately 90% of the electric utility revenue generated in the United States and extends to participation in more than 35 countries. The worldwide membership that supports our work comprises more than 1,000 organizations. While most members are electric utilities, others are businesses, government agencies, regulators and public or private entities engaged in some aspect of the generation, delivery, or use of electricity.

The by-laws of EPRI provide that members pay for their membership. According to EPRI, “most members are electric utilities.” So, a good hunk of EPRI’s funding comes from—you guessed it—the electric industry.

EEI—the overt electric industry lobbyist—is clearly in cahoots with EPRI on the EPRI EMP Report. Scott Aaronson, Vice President for Security and Preparedness at EEI has been repeating the same industry talking point in a Congressional Hearing as well us in response to the new EMP Executive order 13865. For example, UtilityDive reported:

“How an EMP may impact critical infrastructure is an extremely complex issue that cannot be solved with a one-size-fits-all solution,” Aaronson said. He added that “sound policy should be informed by sound science,” pointing to EPRI’s upcoming report, which is expected to include recommendations for “mitigation approaches and investments.”

The difference is that this EPRI EMP Report is the snake oil that the electric utility industry wants to sell America in order to avoid the “unduly burdensome” job of protecting us from an existential threat.

I offer the following 3 points that Americans should consider before putting any credence in the EPRI EMP Report.

Point 1: The EPRI EMP report is neither unbiased nor independent.

The bias of the EPRI EMP Report has been apparent since this “study” started. On December 31, 2016 EPRI released a propaganda video in which they compared the concern of the EMP threat with the hysteria over Y2K. (The inference being “nothing happened then…”)

The title of the video is “High-Altitude Electromagnetic Pulse (HEMP): Potential Impacts, and EPRI Research Approach.” This video describes the reason for EPRI’s upcoming three-year EMP study. Basically, they say more study is needed (despite the incredible number of studies we already have and all the recently released unclassified EMP Commission Reports). “More study is needed” has been the electric utility industry’s mantra on EMP for years because it defers any action to the future.

Since the EMP can has been kicked down the road for years—and it was apparent to the industry that the road was ending, the next industry tactic was to engage EPRI to downplay the threat. From its beginnings, this “study” has downplayed the EMP threat both subtly, as in the 2016 video, and overtly in press releases and interim reports. Here is another early example. On December 19, 2017 EPRI issued a press release, assuring us that:

New research on the potential risk to the U.S. electric grid from a high-altitude electromagnetic pulse (HEMP) event suggests that service interruption due to the late-time pulse or E3 alone would be limited to a regional level and would not trigger a nationwide grid failure.

This contradicts numerous other credible federal reports. And in 2017, hadn’t they just started this project and wasn’t it supposed to be a “three-year study?” Hmmm. Seems like a major conclusion to start out with. (More on this later.)

Nor, is the EPRI EMP Report is “independent.” The below admissions are right from Randy Horton’s testimony from the 2017 FERC Technical Conference about the EPRI EMP study:

“EPRI’s members represent approximately 90 percent of the electricity generated and delivered in the United States” [Page 1.]

“To address these issues, EPRI initiated a three-year research project in April 2016 with financial support from fifty-six electric utilities, to improve understanding of the potential impacts of HEMP on the bulk-power system and to develop cost-effective mitigation options.” [Page 2.]

While we already knew that this was an industry effort to avoid the EMP problem, and that EPRI is not truly “independent.” This admission that the funding for the study was provided by the electric industry—who has a vested interest in the outcome (i.e., one particular outcome) of this “study”—means that EPRI may be tainted by the bias of the funders.

EPRI’s study was funded by the electric utility industry—who has a financial incentive to ensure that the requirements placed upon them for EMP hardening are not too stringent or expensive. Since investor owned utilities (according to EEI) provide electricity to two-thirds of the U.S. population, the shareholders’ interests—not national security concerns—are driving EPRI’s financial supporters and thus influencing EPRI.

This is an electric utility industry lobbying pamphlet – not a scientific report.

What does Horton mean by “conservative”? Well, when credible scientists do a study of EMP (such as in the 2010 Oak Ridge National Laboratory Study and the EMP Commission study), they use a conservative estimate of the HEMP fields: that is, a reasonable upper bound estimate. EPRI said they were going to do that but did not. They used an old 24 V/km estimate for the E3 HEMP, when they knew the military threat was much higher.

EPRI said that they were going to use a reasonable upper bound estimate but then failed to do so. Moreover, EPRI was told of their error early in their study (in 2017) by the EMP Commission but EPRI ignored it.

So, to real scientists studying the EMP problem, “conservative” would mean a reasonable upper bound estimate. But EPRI’s “conservative” means exactly the opposite: It means that EPRI is using a low estimate. They are low-balling the problem rather than paying any attention to the waveform recommended by the EMP Commission.

FACT: According to the Horton’s testimony, EPRI is basing its models on an E3 of 24 V/km. However, this lynchpin parameter upon which the EPRI EMP Report’s conclusions depend is refuted by more credible unclassified sources:

The “Threat Characterization” is the very first task in EPRI’s study. So their entire study is based on a low ball estimate when the actual military threat is much higher. And EPRI knows this.

Doesn’t this by definition make the EPRI report a fraud?

The fraud is actually hidden in plain view. This is from the February 2017 EPRI report “Magnetohydrodynamic Electromagnetic Pulse Assessment of the Continental U.S. Electric Grid“:

In 2016, the Electric Power Research Institute (EPRI), which is funded by the electric power industry, published an erroneous report that significantly underestimates the nuclear E3 EMP threat to electric grids. EPRI and others have used the report to lobby against Federal and State initiatives to protect the electric grid against nuclear EMP attack.

In fact, in the Chairman’s Report, Dr. Graham gets quite specific about the inadequacy—and misleading nature—of EPRI’s report:

The EMP Commission says that the EPRI report underestimates the EMP E3 strength by a factor of 3. For more technical details, see the Commission’s report: “Recommended E3 HEMP Heave Electric Field Waveform for the Critical Infrastructures.”

Does anybody still believe that EPRI is a legitimate research organization working for the public benefit?

EPRI’s Randy Horton admits in his 2017 testimony that EPRI is using the data from the 1985 and 1993 ORNL reports, but they are completely downplaying the “conflicting” 2010 report [Meta-R-321, The Late-Time (E3) High-Altitude Electromagnetic Pulse (HEMP) and Its Impact on the U.S. Power Grid].

And they say they are going to resolve conflict between the 1993 and 2010 ORNL reports by using their new (low-ball) model:

“The purpose of the EPRI study was to determine, using advanced transformer models that were not available at the time of the ORNL research, if a significant number (hundreds) of bulk-power transformers would experience thermal damage from a single E3 event. More simply, the study sought to answer the question, ‘if a HEMP attack occurred, would there be enough bulk-power transformers left to facilitate system recovery?’”

EPRI had already reached their conclusion at the start of their study. In fact, in violation of every legitimate scientific method, It appears that EPRI started with the conclusion that EMP would not cause a nationwide cascading grid failure and then designed the study around that conclusion. EPRI decided from the beginning in 2016 to use a very low estimate of the EMP in their models. The “inconvenient” conflicting EMP Commission reports and the newer 2010 ORNL reports were completely ignored as they did not support EPRI’s (electric industry paid for) conclusion.

Why this is important

The entire electric utility industry is going to beam and glow when talking about how great the EPRI report is. They are going to try to use this clearly misleading report to influence the government and private sector into not sufficiently protecting our critical infrastructure. This is akin to a snake oil tonic remedy: The EPRI EMP Report does not cure our critical infrastructure vulnerabilities: it actually worsens them.

EPRI, if I am wrong and if you are a legitimate scientific institution, interested in the truth, then you should have no problem running your models and tests using, for example, the more widely accepted E3 85 V/km wave form and publishing those results?

I didn’t think so. (After all, “sound science” is not what this report is about.)

EPRI’s Report will help protect the U.S. if we can convince Kim Jong-un to limit his EMP waveform to the lower EPRI standards.