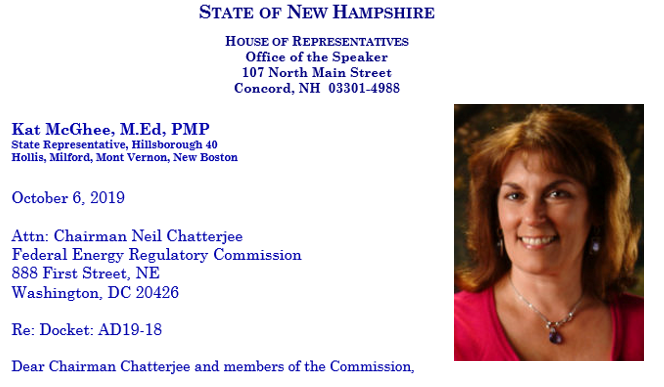 Is it possible that there are still representatives that represent the people? The answer is yes. They may be rare, but I just met one. More on that story in a moment. First, the big news.

“With cyber mischief and the potential for cyber warfare on the rise, we are in no position to dismiss tools that help reinforce critical security. On the question of cyber-security transparency for the grid system, I believe we are benefited by more public insight, not less.”  -Kat McGhee

Well said. Cybersecurity experts, critical infrastructure protection experts, numerous citizens and now a state representative have jumped into this fight by submitting comments to the Commission. You can too –  the deadline to submit your letter is October 28, 2019. Get details on how to submit a letter HERE or HERE.

What is the Issue?

The issue is relatively simple. After investigation and detailed study, many of us in the Secure The Grid Coalition concluded that the electric utility industry’s cover up of the names of companies that violate cybersecurity and physical security standards is not making us safer  – in fact, the opposite is true. Without transparency, there is little incentive for companies to do more than the minimum to protect us. If they get caught violating the standards, the public, investors and other regulators will never know.

Presently, you do not have a right to know if the company you and your family depend on for electricity complies with cybersecurity and physical security standards or not!

Why is this important? Here are several reports and studies I have conducted that show the failures of our regulatory system and the need for public transparency and better public information:

So, after filing hundreds of Freedom of Information Act (FOIA) requests and filing motions to intervene in hundreds of FERC penalty cases, the Coalition finally succeeded in forcing FERC to open this issue for public comment.

And now, New Hampshire’s own Kat McGhee has stepped up:

“I am in favor of greater accountability for the recorded incidents of cyber attacks to our national grid infrastructure; a system that invites scrutiny augments its own ability to assess threats and ensures an honest reckoning of the effectiveness with which current security measures are matching threat risks.” -Kat McGhee

How is Democracy Supposed to Work Again?

I know that many times as citizens, we can feel that our voices are not heard by our government. In my activities to help secure the grid, I have written far more letters and emails to the government that have gone unanswered than answered. This issue is a perfect example.

After FERC opened the transparency issue for public comment, I wrote to all my federal and state representatives, the state public utilities commission, the state consumer advocate, etc., etc. Most of them ignored me completely. A few sent perfunctory responses that they care about blah, blah, blah (and then no further response when I tried to follow up). Two outright refused to participate in filing comments – both claiming they didn’t know enough about the issue to comment. (Hmm. I guess two months is not enough time to read the whitepaper and some of the responses in the docket?)

But one person, Representative Kat McGhee, asked to meet with me to discuss the issue. I was actually shocked.

A few days later, we met for an hour and discussed grid security in a bit of detail. She listened, took notes and had also read up on the issue before I arrived to the meeting. In sum, she was on it. She told me that she would submit a letter supporting increased transperancy – which she did on October 7, 2019. (Click HERE for her letter to FERC.) She also said that she would reach out to others who may be able to help (which she also subsequently did).

Okay, run that by me again: You call your representative with a concern and they represent you? What an interesting concept!

Seriously, thank you Kat McGhee for doing what you were elected to do. You are one of the few elected officials I have met that actually does that.

On election day, I will remember who stepped up to protect us – and who did not.

CLICK HERE to find out how you can get in this fight!