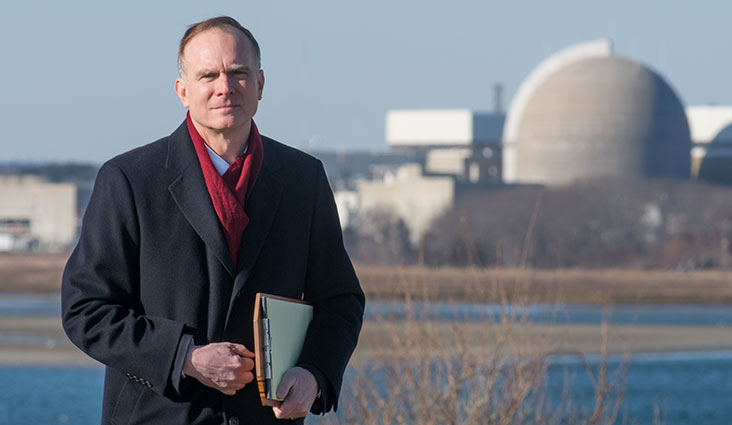 FERC is a Failed Regulatory Agency

The Federal Energy Regulatory Commission (FERC) has failed to protect the American people, specifically from threats to the electric grid. We need a new breed of Commissioner. Thomas Popik, founder of the New Hampshire based Foundation for Resilient Societies, is just who we need.

For the past 15 years, Federal Energy Regulatory Commissioners have been cut from the same piece of cloth. All but two were lawyers – and most go on to high power positions in huge law firms – representing the utility industry. Some actually go to the utility industry itself. In other words, for most past commissioners (and present ones, I’m sure) FERC is a stepping stone to a lucrative future position in the industry, or representing the industry.

Is it any wonder that FERC Commissioners don’t want to upset the industry by requiring them to protect the electric grid from hazards such as cyber, electromagnetic pulse (EMP), geomagnetic disturbance (GMD), physical attacks and untrimmed foliage? The industry is fighting such efforts through its champion, the North American Electric Reliability Corporation (NERC) – if you are a FERC Commissioner, why would you annoy the industry that is going to give you a lucrative position when you leave FERC?

Here is a chart of the last decade of FERC Commissioners – where they came from and where they went. You’ll see some patterns emerge.

FERC Has Failed on Grid Security

The United States electric grid remains vulnerable to a variety of threats despite (and, in fact, partly because of) the advent of the current regulatory scheme. The industry lobbied to have a self regulatory body (NERC), they got it and have proceeded to avoid protecting the electric grid in any meaningful way. Moreover, the industry has engaged in a massive cover up of the identities of companies who violate Critical Infrastructure Protection (CIP) standards. FERC has just stood by and let this happen.

We have report after report from the Congressional EMP Commission warning that the electric grid is vulnerable to EMP, GMD, cyber threats, and physical attacks. In fact, We have two decades of hearings, reports and expert testimony and studies proving beyond any doubt that the grid is vulnerable.

Yet, the FERC Commissioners have literally done nothing.

I’m frequently asked why this is. Why does the industry refuse to harden itself from known threats? Why doesn’t FERC do anything to protect the grid? From my view:

The industry: The industry has crafted its own favorable (to the industry) regulatory scheme whereby it can do whatever protections are convenient and inexpensive to do – but it can avoid any actions that the industry deems too “burdensome.” Simply put, the security of the electric grid is optional – we depend on about 1500 electric utility industry entities to do the right thing – but there is no requirement that they do the right thing.

The FERC Commissioners: They have a cushy job waiting for them in the industry – or representing the industry if they just maintain the status quo and not step on any industry toes.

Who is Thomas Popik?

Thomas Popik is a patriot, a veteran, an engineer and has done a great deal to protect you and your family. In sum, he is an American hero.

Tom has been in the fight to protect the grid from EMP, GMD, Cyber and physical threats for years. He has testified before state, federal and international bodies on these threats.

Tom is an engineer by training. And the North American electric grid is the largest machine in the history of the world – Tom knows the electric grid intimately. He knows how it works and he knows how to protect it. Does a lawyer? So, Tom is an engineer with a heavy business background and expertise in critical infrastructure protection. He is exactly what we need in a FERC Commissioner – somebody who will work to protect the electric grid and not be jockeying for a position in the industry he is regulating!

He told me the story of going to a lecture in 2010 called “In The Dark” at the U.S. Army War College in Carlisle, Pennsylvania. After the conference, he and a fellow attendee started a non-profit think tank: The Foundation for Resilient Societies. This group has been instrumental in trying to hold the federal government and the utility industry accountable for critical infrastructure protection. Here is Tom’s bio from the Foundation for Resilient Societies website:

Thomas Popik, President, Director, and co-founder. In addition to leading Resilient Societies, Thomas Popik serves as a Principal Investigator on critical infrastructures, specializing in vulnerability assessment, comparative risk analysis, and economic modeling. In his commercial sector work, Mr. Popik is a principal of Geosegment Systems Corporation, a market research firm specializing in the U.S. banking and mortgage industries.  Mr. Popik holds a Master of Business Administration from Harvard Business School and a Bachelor of Science in Mechanical Engineering from MIT. In his early career, Mr. Popik served as an officer in the U.S. Air Force, with a final rank of Captain. Mr. Popik was also a co-founder of the Academy for Science and Design, New Hampshire’s charter high school for science and math education.

What Can you Do To get Thomas Popik Nominated to FERC?

If you care about the security of the electric grid, this is our chance to be heard! Let the White House know that President Trump needs to nominate Thomas Popik to FERC! The link to email the President is below. We need all patriots to take a few minutes and make this important recommendation and spread the word!

Write a letter to:

Or you can email the President BY CLICKING HERE.