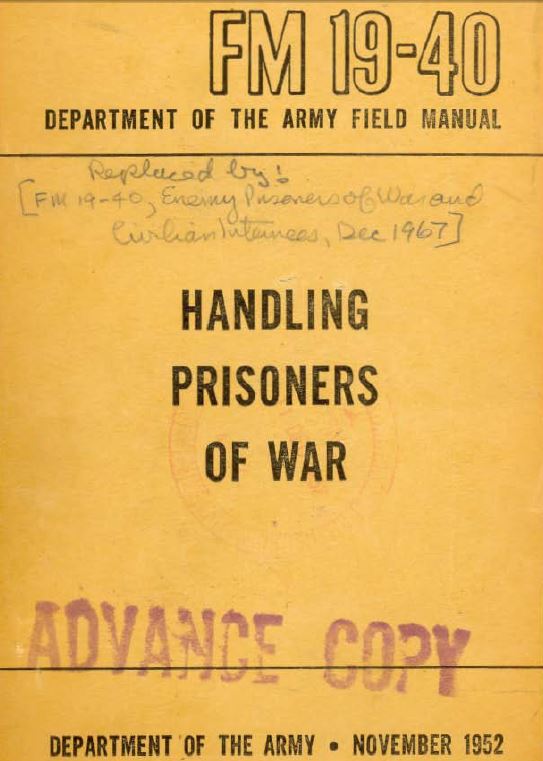 The “recently leaked” manual  on “FEMA internment camps” is neither recent, nor evidence of some conspiracy.

I don’t often waste my time debunking conspiracy theories, but I have occasionally provided this service. The last time I rolled my eyes, held my nose and jumped in was for the conspiracy theory about Executive Order 13603 (The one about President Obama coming to seize your food). I once again find myself compelled to waste an afternoon knocking off some tin-foil hats. Actually, I do think it is important I address this one: We don’t need internet fear mongers putting out stupid and patently false information and scaring people.  We have enough to really worry about like North Korea, Iran, the vulnerability of the electric grid, and the fate of Real Housewives after Theresa and Juicy Joe go to jail.

And besides, my military service was spend for a large part in the U.S. Army Military Police (whose manuals the conspiracy theorists are besmirching) so perhaps I’m taking this one a bit personally.

So, the rumor is that a “recently leaked” government document is evidence of an insidious plot to throw Americans into “FEMA internment camps.” The purported “leaked” document is Army FM 3-39.40 Internment and Resettlement Operations. This conspiracy theory is not new – it has been around for a while, and I’m not breaking rocks in a FEMA internment camp yet. Tin-foil-hat conspiracy types have been “reporting” this for years. Here’s one from 2007. “Field Manual 3-19.40 Plans for Civilian Internment: Stalag 17 American Style.” In 2012, the conspiracy types were at it again: “Leaked U.S. Army Document Outlines Plan For Re-Education Camps In America.” And “conspiraspace” continues to be abuzz with this one.

But it gives me an idea: Maybe I’m in the wrong business. I could be in the conspiracy theory invention business. Here’s my first one:

Let’s say the Army had a medical manual. The manual had a section on childbirth, a section on prostate exams and a reference to working with other agencies to set up emergency treatment facilities in a disaster. Let s say I took a screen shot of these three passages and put them together in a blog post entitled: “Leaked U.S. Army Document Outlines Plans To Give Pregnant Women Prostate Exams in U.N. Run FEMA Internment Camps.” Wouldn’t that be ridiculous? Well that is precisely what has happened here.

The FEMA internment camp “evidence” is manufactured in the same manner. The proponents take a few passages from different sections of FM 3-39.40 and similarly put them together out of context to come up with “support” for their theory that President Obama is going to dispense with American society and herd us all into FEMA internment camps. (This was the same M.O. used in concocting the Executive Order 13603 conspiracy – random passages, taken out of context are often “evidence” of a conspiracy.)

In this widely circulated 2012 article, the conspiracy theorist takes a few passages from this 326 page manual and strings them together to make them say something they don’t actually say. Yes, there is such a thing as a “PSYOPS Officer” and he has certain duties. Yes, the U.S. military has been in the past, and may again in the future be called upon to assist in the U.S. during times of disaster (Remember Katrina? They were there.) And, yes, the military may in certain missions work with both international agencies such as the United Nations (Korean War), the Red Cross (every war since the Red Cross was established) or even FEMA (Hurricane Katrina). Remember, that the Department of Homeland Security (which FEMA falls under) was only established on November 25, 2002, so there is nothing particularly insidious that they weren’t mentioned in military manuals before then – they didn’t exist!

Here is the truth. 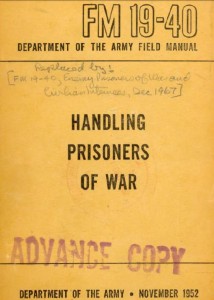 U.S. Army Military Police have been given the mission of handling prisoners of war since the Revolutionary War. The earliest doctrinal manual on the prisoner mission I was able to find (although I’m sure there were many earlier versions) was FM 19-5 from 1944. This role was actually later put into its own manual, FM 19-40 in 1952. As with everything in the Army, doctrine has progressed. The “recently leaked” manual, FM 3-39.40, is just the most recent version of that old FM 19-40 from 1952. It has gone through several major revisions and consolidations with other manuals, like FM 19-60, over the years (see the reference section below for a chronological accounting and links to past versions). Notably, the modern version first appeared as FM 3-19.40 in August of 2001 during the George W. Bush administration. More notably, in the 2001 version (before the advent of the Department of Homeland Security – and before the attacks of 9/11/2001) it was clear that the military could be used in roles inside the U.S. After all, in a disaster, we would expect the federal government to do something, no? (It is quite inconvenient to many conspiracy theories that much of this predates 9/11.) Moreover, a quick look at FM 19-15 from 1968 and FM 27-15 from 1941 shows that none of this is new: The military has had both domestic “Civil Disturbance” and “Disaster Relief” missions in its doctrine for decades. It’s not unusual. There is absolutely nothing in new in the “recently leaked” manual, FM 3-39.40.

Is Franklin D. Roosevelt The Father of FEMA Internment Camps? 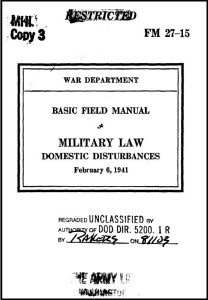 So, unless President Bush passed the “FEMA internment camp”  conspiracy on to President Obama (because he simply didn’t have time to get around to it), these facts should put this conspiracy to bed. Of course, Bush got this mission from previous presidents, so it all seems to trace back to at least Franklin D. Roosevelt. Damn him.

But these facts won’t put the conspiracy to bed. Facts seldom do. There are those who insist on trying to convince us that the U.S. government is going to throw us (especially preppers, apparently) into “FEMA internment camps.” Well, perhaps they are, but FM 3-39.40 is not evidence of this. Of course, perhaps President Harry Truman had “FEMA internment camps” in mind in 1952 when FM 19-40 was published (or perhaps Roosevelt did when FM 27-15 was updated in 1941) and passed the conspiracy down the subsequent line of presidents (both red and blue) to the current day. And now President Obama is finally going to bring the pre-WWII vision of FEMA interment camps to fruition! (Gee, I never thought of this until now. Oh, the humanity!)

The facts are that our government and military has been prepared for (and written manuals on) since at least the 1930s:

If you want to believe that there is an insidious government plot to put us all in FEMA internment camps, then there is really nothing I can say to convince you otherwise. If I’m wrong, save me a bunk and I’ll see you there. But for those out there that are really after the truth, look through the manuals below for yourself. What you will see is simply the evolution of the military police to handle the missions it encounters on the modern battlefield. Read for yourself and decide who to believe. There is a really interesting paper below from the Army War College in 1990 which discusses the changes to the military police mission and that doctrinal change was needed. Honestly folks, this has been going on a lot longer than the Obama Administration.

Am I a proponent of trusting the government?  Absolutely not and neither were our founding fathers. (I actually find the 1941 FM 27-15 more disturbing than the 2010 FM 3-39.40.) But I am a proponent of the facts and the facts do not support this conspiracy. Sorry. So cancel my reservation at the FEMA Hyatt. I’m not planning on being there anytime soon.

FM 19-60 Confinement and Correctional Treatment of US Military Prisoners (October 8, 1970)