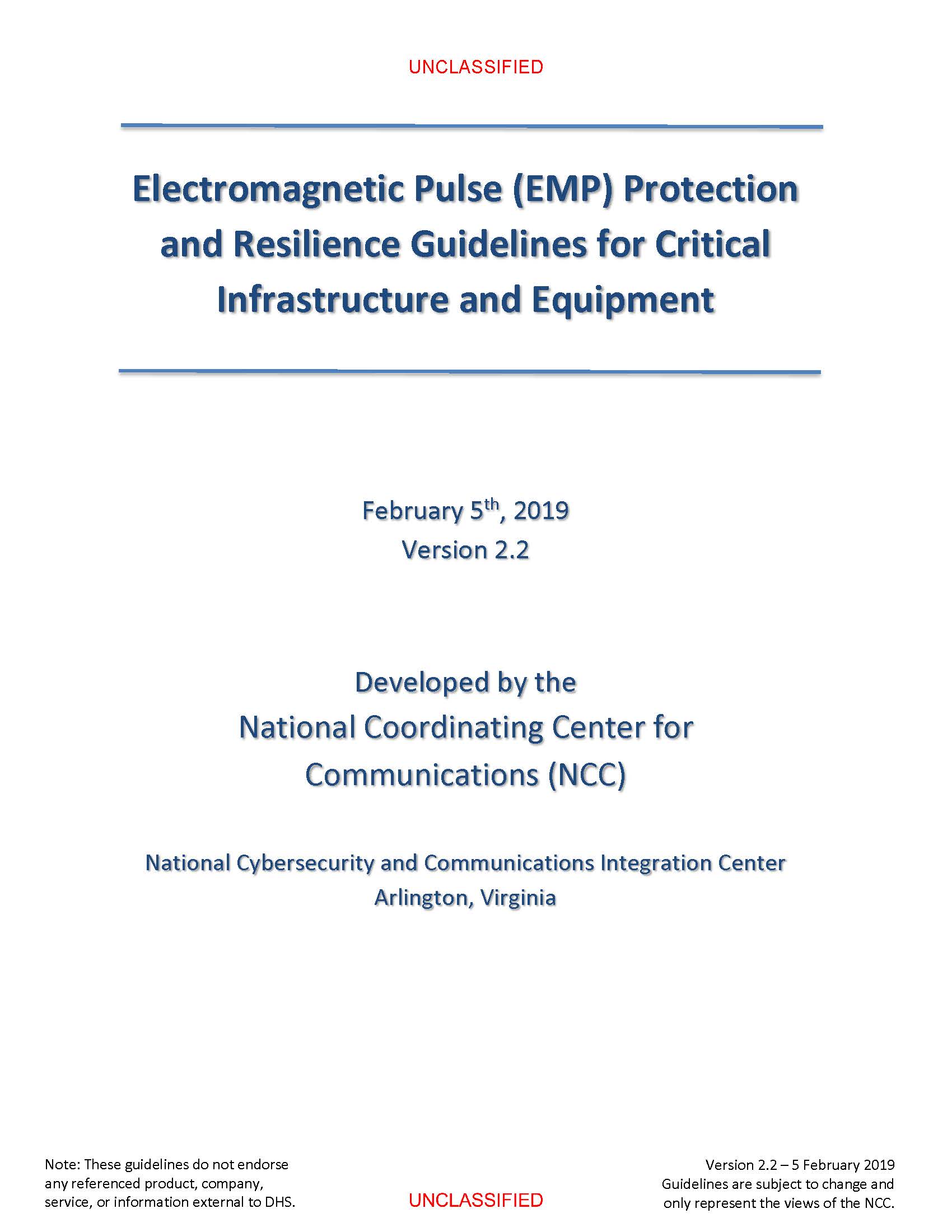 Version 2.2 – 5 February 2019
Guidelines are subject to change and
only represent the views of the NCC.

Executive Overview:
This document provides guidelines to assist federal, state, and local officials and critical infrastructure owners and operators to protect mission essential equipment against electromagnetic pulse (EMP) threats. It was created to help fulfill the Secretary of Homeland Security’s responsibilities to:

These guidelines also respond to the U.S. Congressional EMP Commission’s recommendation that the “Department of Homeland Security should play a leading role in spreading knowledge of the nature of prudent mitigation preparations for EMP attack to mitigate its consequences.” [Report of the Commission to Assess the Threat to the United States from Electromagnetic Pulse (EMP) Attack, Critical National Infrastructures, page 181, 2008]. The Department of Homeland Security (DHS) takes seriously the findings of this Commission, such as:

“The critical national infrastructure in the United States faces a present and continuing existential threat from combined-arms warfare, including cyber and manmade electromagnetic pulse (EMP) attack, as well as from natural EMP from a solar superstorm. During the Cold War, the U.S. was primarily concerned about an EMP attack generated by a high-altitude nuclear weapon as a tactic by which the Soviet Union could suppress the U.S. national command authority and the ability to respond to a nuclear attack—and thus negate the deterrence value of assured nuclear retaliation. Within the last decade, newly-armed adversaries, including North Korea, have been developing the ability and threatening to carry out an EMP attack against the United States. Such an attack would give countries that have only a small number of nuclear weapons the ability to cause widespread, long-lasting damage to critical national infrastructures, to the United States itself as a viable country, and to the survival of a majority of its population.”

There are four EMP Protection Levels defined herein, as outlined in Table 1. These levels were initially developed at the request of the federal Continuity Communications Managers Group (CCMG), but are applicable to any organization that desires to protect its electronics and critical infrastructures. For additional background on EMP, a set of reports can be found at “www.firstempcommission.org” that includes information about high-altitude EMP (HEMP), Source Region EMP (SREMP), and Intentional Electromagnetic Interference (IEMI) EMP.