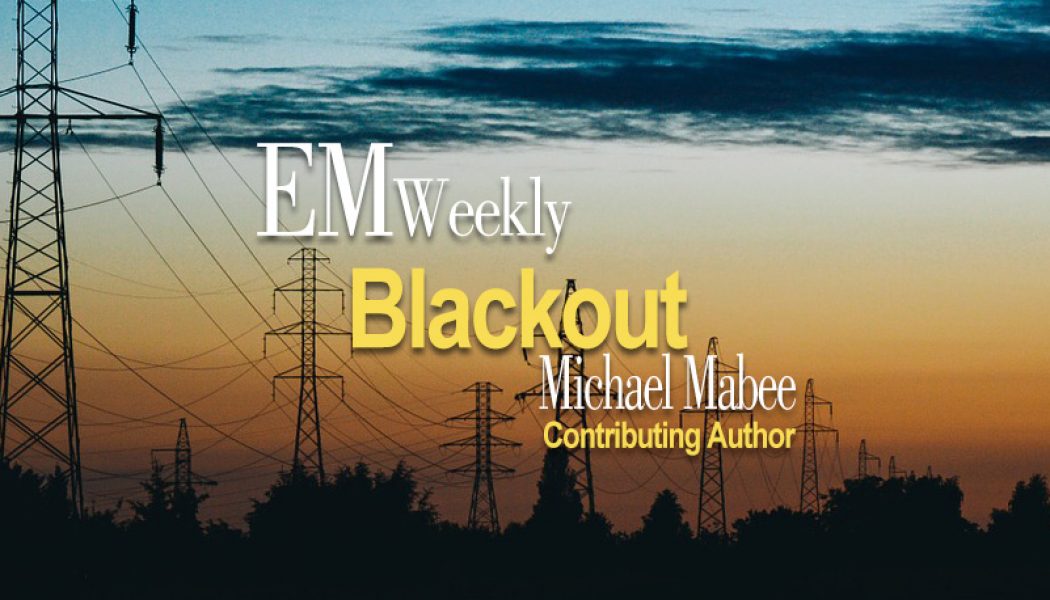 Blackout: What we learn from electric grid failures

Maybe some of us are even “prepared” for a blackout and have a generator and some gas. Maybe we have 72 hours’ worth of canned food stored away like FEMA tells us. Even in the emergency management world, every exercise comes to an end. Every hurricane comes to an end. Every blackout comes to an end. Moreover, we have the “edge effect” where there are always resources available from outside the disaster area to assist us until the power comes back.

We are complacent. “Blackouts are temporary” we think.

But what if the power went off and did not come back months – or years? In March of 2017, the United States Senate Committee on Homeland Security and Governmental Affairs reported:

The United States depends on its critical infrastructure, particularly the electric power grid, as all critical infrastructure sectors are to some degree dependent on electricity to operate. A successful nuclear electromagnetic pulse (EMP) attack against the United States could cause the death of approximately 90 percent of the American population. Similarly, a geomagnetic disturbance (GMD) could have equally devastating effects on the power grid.

We only have to look south: Months after Hurricane Maria struck and we still had people without power or even access to safe water in Puerto Rico. And this is a disaster where massive outside resources were available and immediately deployed.

What if the whole country was the disaster area?

Congress has studied – and failed to act – on the existential threats to the electric grid for decades. Meanwhile, only a few people in emergency management are writing about a long-term blackout scenario.

Back in 2013 Ken Chrosniak wrote an article for Fire Engineering: Electric Power Blackout: The Power of One. More recently, Eric Holdeman has written several times about EMP and GMD in Emergency Management Magazine online. “What Role Do You Have in an Electromagnetic Pulse?”  “Are EMP and CME a Hazard or Not?” “Protecting FirstNet from an EMP”.  If you are an emergency manager, you really need to read these articles: You and your jurisdiction are not prepared for a long-term blackout.

It’s not really anybody’s fault (until after you read this article). Our emergency management system functions as advertised and as we have been trained. But there is a problem.

The fatal flaw of our emergency management system

The strength of modern emergency management is its ability to quickly bring in outside resources. Most towns can handle a structure fire or an auto accident with their own resources. But when something larger happens, like a tornado, a fiery multi-car pile-up with multiple casualties, the system expands and resources are brought in from neighboring towns. And in a larger scale disaster, like a hurricane or earthquake, resources can be brought in from the state and federal government as well as agencies all over the country. So, in theory (and in practice) our emergency management system can handle disasters small and large. We believe we can always “scale up” when needed.

But this strength is also a critical weakness: What if the disaster was of national scale and so there were no outside resources available to help your town? What if you were on your own? What if all you had to work with were the resources presently within your town’s borders?

The threats to the electric grid are real

There can be no serious debate that our electric grid is vulnerable to a number of things, from cyber-attack, electromagnetic pulse weapon, terrorist attack, solar flare to a good old fashion ice storm or errant tree branch. While a long-term failure is considered by some to be a remote possibility, the possibility is frightening. Moreover, our present exercises all assume the availability of outside resources and therefore do not realistically prepare us for a worst case scenario.

North Korea now has the capability of utilizing electromagnetic pulse weapons and has specifically threatened the U.S. with them. China and Russia already have this capability. Moreover, there is the possibility that a rogue nation such as Iran, or a terrorist organization, could get their hands on a small nuclear weapon. A small nuclear weapon fired from a container ship off the U.S. coast and detonated in high in the atmosphere could potentially take down the U.S. electric grid. Russia sells this capability.  Iran has practiced it. North Korea is capable of it and has threatened it.

And even if you don’t believe that an EMP attack could ever happen, fine. Forget that one. There is a 100% certainty that the earth will be hit by a large geomagnetic disturbance (GMD) in the future. Remember, a relatively “minor” GMD caused a massive blackout in Quebec in 1989. If a larger GMD occurred, such as the 1859 Carrington Event (which occur every 100 years or so) the results would be catastrophic.

So, we have a 100% possibility of a future catastrophic GMD event.

And what about cyber-attacks? In 2015 and 2016, we saw the power grid in the Ukraine taken out twice in by cyber-attacks believed to have originated from Russia. Or physical attacks? We saw a well-planned and coordinated physical attack against a high-voltage Metcaf transformer in California []. A successful coordinated attack against a few critical transformers would have a devastating impact on the U.S. electric grid.

William R. Graham, Chairman of the congressionally chartered Commission to Assess the Threat to the United States from Electromagnetic Pulse (EMP) Attack noted in 2008 that:

Electrical power is necessary to support other critical infrastructures, including supply and distribution of water, food, fuel, communications, transport, financial transactions, emergency services, government services, and all other infrastructures supporting the national economy and welfare. Should significant parts of the electrical power infrastructure be lost for any substantial period of time, the Commission believes that the consequences are likely to be catastrophic, and many people may ultimately die for lack of the basic elements necessary to sustain life in dense urban and suburban communities. In fact, the Commission is deeply concerned that such impacts are likely in the event of an EMP attack unless practical steps are taken to provide protection for critical elements of the electric system and for rapid restoration of electric power, particularly to essential services.

The cavalry is not coming

Again, the problem: There are 35,000 towns and cities and over 327 million people in the United States. If we have a national-scale disaster (loss of the electric grid), who is coming to the rescue?

Obviously, the answer is nobody. Each town and city would be on its own. We are completely unprepared for this despite our mantras of “all hazards” preparedness and “preparing for the worst.” We are doing neither. Why?

Perhaps we don’t drill for this scenario because it is hard. We like to exercise to success. If you did a tabletop exercise (TTX) right now in your town or city where the scenario was a long-term national power outage, and no outside resources were available, many notional people would die.

What I am telling you is let them die. It is better for notional people to die in a TTX then real people in a disaster for which we are woefully unprepared. Let these notional townspeople starve and die of disease and societal collapse. The purpose of the exercise is not to “win” – the purpose is to learn and make sure we are prepared for the real thing. The objectives are:

When the grid goes down for a long period of time, we can briefly broad-brush the challenges to a town as follows:

When you really think about the implications of each of the items above – and begin to put this operating picture together, it is grim. And there is no chance that you can figure all this out after the fact. If you were not prepared for a scenario in which your town was starving, you’re not likely to miraculously find a solution when the beast is upon you.

If Yogi Berra was an emergency manager

But each of the above problems is solvable. If Yogi Berra was an emergency manager, I bet he’d say: “Pre-disaster mitigation works if it is done before the disaster.”

Here is what you will learn from the TTX: The horrific effects of a long-term blackout are predictable and manageable. The catch is that you need to take action to mitigate the effects ahead of time. Let me give you a cheat sheet. It will mostly boil down to basic survival needs:

I’m not saying that all the answers are simple – they will take much effort and you cannot do it alone. But all of the above problems can be manageable with the resources you have in your town right now.

Which brings us to the three most common “objections” to preparing for a word-case scenario:

All of these objections are just patently false. Let me respond to each objection in detail:

Sometimes we think of “resources” as a line-item in a budget or government “FTE” (employees). However, the community is your resource multiplier. Think of it. In your community you likely have people with every needed expertise:

For virtually any problem that you can think of in a “worst-case scenario” you likely have somebody with the expertise to find solutions. Right now, these are your untapped resources. We just need to find ways to engage them.

It’s too late after the disaster happens (when we will all have an awful case of “gee, I wish we had…”). This is why meaningful pre-disaster mitigation [https://michaelmabee.info/pre-disaster-mitigation-time-change-culture/] is critical. Let’s identify the problems and solutions now – and, most importantly, work to have solutions and resources ready when a disaster happens.

Civil defense is the organization and training of citizens to play a key role in the community’s emergency preparedness and survival after an attack or disaster. So, if we can somehow organize the above resources (people and expertise) and focus the organization on pre-disaster mitigation, imagine what we could do. And we have not touched the town emergency preparedness budget.

One way to do this is to set up a 501(c)(3) nonprofit civil defense organization in your community. (Some volunteer ambulances and fire departments are structured this way.) The organization can raise its own funds through donations. You can use an existing plan or create your own.

The important thing is to tap into this vast resource pool in your community and focus (i.e., lead) the community’s efforts in emergency preparedness.

You can’t do it alone or with your present budget. The good news is that you don’t have to. The cavalry is not coming. It is already in your community.

Michael Mabee is the author of “The Civil Defense Book: Emergency Preparedness for a Rural or Suburban Community” which is a plan for communities to set up a non-profit civil defense organization. He blogs on emergency preparedness, civil defense, pre-disaster mitigation and community resiliency. You can subscribe to his blog at https://michaelmabee.info/. 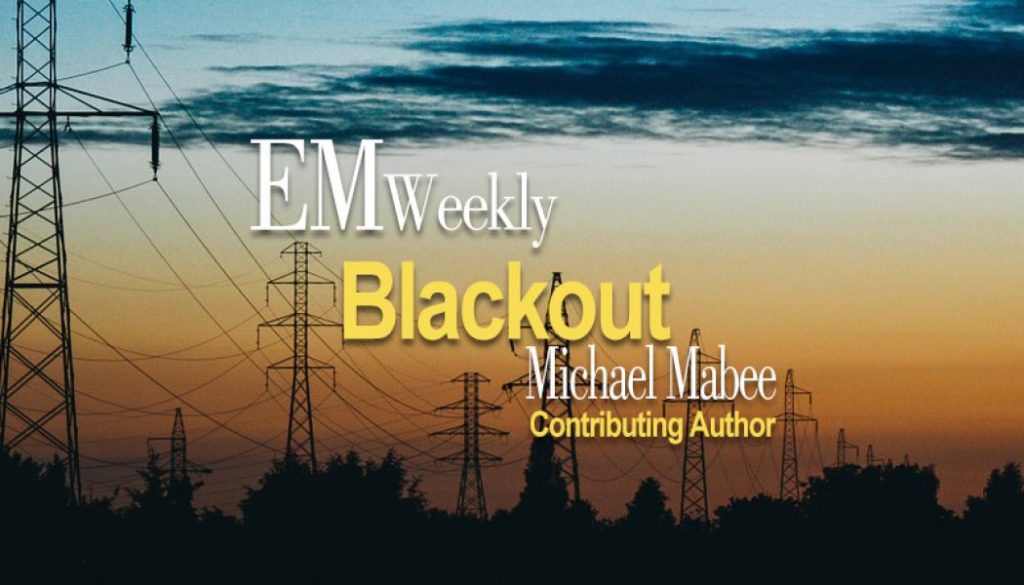