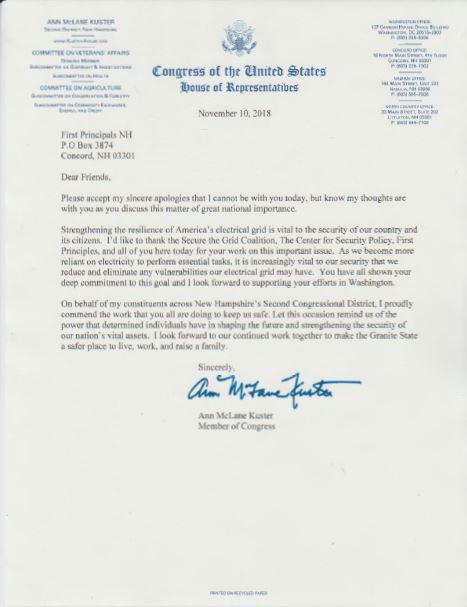 Congresswoman Ann Kuster sent a staffer to read the attached letter to the citizens of New Hampshire (and the U.S., for that matter) at the New England Long-Term Power Outage Summit on November 10, 2018. We have all heard politicians make promises, but I take Congresswoman Ann Kuster at her word that she considers that “strengthening the resilience of America’s electrical grid is vital to the security of our country and its citizens.” She also thanked the Secure the Grid Coalition for their work on this issue.

We asked the citizens at the Summit to write Congresswoman Ann Kuster to thank her for her support on this issue. I am asking everybody reading this to do the same – whether you are from New Hampshire or elsewhere. This is a national issue.

I am putting a copy of my letter to Congresswoman Ann Kuster below. Please write to her – and any other member of Congress that represents you. If you live outside of New Hampshire, I would recommend attaching a copy of Congresswoman Ann Kuster’s letter so we can get some of these members of Congress together on this issue. To find your representative, go to the U.S. House of Representatives’ website by clicking here and enter in your zip code.

It is going to take a groundswell of citizens contacting their representatives to spur Congress into action. Be a part of it!

I am a New Hampshire resident and I was at the New England Long-Term Power Outage Summit on November 10, 2018 when your staffer read your letter to the audience. As a citizen of the Granite State – as well as a member of the Secure the Grid Coalition – I was very happy to hear that you too are concerned about the security of the electric grid.

I believe that a two-pronged approach is necessary. First, Congress must fix the failed current regulatory scheme which has proven unable to protect the self-regulated electric grid. The Federal Energy Regulatory Commission (FERC) either does not have the power – or the will – to force the industry to protect the grid and Congressional intervention is required. Second, we need Congress to reintroduce the bipartisan H.Res 762 from the 112th Congress (“Expressing the sense of the House of Representatives regarding community-based civil defense and power generation”). This resolution would send a message to the 35,000 towns and cities across the United States that we need to build a culture of preparedness.

This is a bipartisan issue and is an opportunity for us to heal this polarized nation. I ask that you do two things in order to help us protect the electric grid and prepare our citizens – and nation – to survive a catastrophic power outage should protection fail.

The Secure the Grid Coalition can offer Congress expert witnesses and studies to assist you in these endeavors. We will keep in touch with you going forward as our partner in this critical work.

Expressing the sense of the House of Representatives regarding community-based civil defense and power generation.

IN THE HOUSE OF REPRESENTATIVES

Mr. BARTLETT (for himself, Mr. FRANKS of Arizona, Ms. CLARKE of New York, and Mr. JOHNSON of Georgia) submitted the following resolution; which was referred to the Committee on Transportation and Infrastructure.

Expressing the sense of the House of Representatives regarding community-based civil defense and power generation.

Whereas the United States has become increasingly more dependent on electronic delivery systems to power daily needs and provide for the common defense;

Whereas these systems would be rendered useless or their functions significantly reduced in the event of a ‘high impact low-frequency’ event such as a cyber attack, coordinated physical attack on electric grid and communications assets, or the electromagnetic pulse (EMP) effects of either a 100-year solar storm or high-altitude nuclear burst;

Whereas the 2010 North American Electric Reliability Corporation (NERC) report, ‘High-Impact Low-Frequency Vulnerabilities to the Bulk American Power System,’ discusses the wide range of threats that could disrupt, damage, or destroy sufficient amounts of the power grids to cause widespread death and economic disruption;

Whereas the Congressional EMP Commission reports of 2004 and 2008 outline the interdependent nature of all critical infrastructure, especially to power and telecommunications and their vulnerability to the EMP effects of extreme space weather and high-altitude nuclear bursts;

Whereas the National Defense University hosted a series of workshops and an energy security exercise in October 2011 with broad participation of Federal, State, [and] local government, and the private sector highlighting the need for greater local sustainability in light of a prolonged nationwide power loss;

Whereas the Hoover-Brookings joint report on distributed power shows that the value of local power generation for security applications is either cost competitive or approaching competitiveness as new innovations come to market;

Whereas, on March 30, 2012, the United States Department of Homeland Security published the ‘National Preparedness Report’ (Report) seeking to create ‘an all-of-nation’ approach to preparedness;

Whereas the ‘National Preparedness Report’ focuses on a catastrophic planning framework known as ‘Maximums of Maximums,’ which centers on collaborative, whole community planning for worst-case scenarios that exceed government capabilities and therefore focus on more local and individual efforts for survival and recovery;

Whereas these high-impact, low-frequency events would cause regional or nationwide collapse of critical infrastructure that could last months or longer, it is incumbent on the Federal Government to reassess its civilian civil defense strategies to include local governments and individual citizens; and

Whereas it is in the interest of national security and local community viability that every community and institution begin to reestablish its ability to generate at least 20 percent of its own power for its critical infrastructure and services in order to provide its citizens with food and water: Now, therefore, be it

Resolved, That the House of Representatives—

(1) encourages every community to develop its own ‘civil defense program’ working with citizens, leaders, and institutions ranging from local fire halls, schools, and faith-based organizations, to create sustainable local infrastructure and planning capacity so that it might mitigate high-impact scenarios and be better prepared to survive and recover from these worst-case disaster scenarios and be better able to affordably and sustainably meet the needs of the community in times of peace and tranquility;

(3) encourages each local community to foster the capability of providing at least 20 percent of its own critical needs such as local power generation, food, and water, while protecting local infrastructure whenever possible from the threats that threaten centralized infrastructure, and do so with the urgency and importance inherent in an all-of-nation civil defense program developed by citizens and their local communities; and

(4) encourages State governments and Federal agencies to support the ability of local communities to become stronger, self-reliant, and better able to assist neighboring communities in times of great need.